Check out updates not shown here on my Twitter!

This is a beat em' up demo which consists of 4 playable singers, with each having their own abilities and elements.

Viva - The one in blue with the most balanced skills and the power of lightning.

Hina - In the red, she goes for long range attacks and isn't afraid to play with fire.

Bahati - The one in yellow can use their large size and perform quite the wrestling suplexes to break the earth!

Sofia - The shortest, this green one is quick with their moves and agility and fly like the wind.

You fight against a band of thieves who stole their treasures they were showcasing at a lounge. They must pay!

The demo has quite a handful of stages. Can you clear them all?

8/22/2021 - Fixed the character selection so the player doesn't default to their character chosen from the player select screen when the next stage happens.

8/24/2021 - Minor patches on some enemies and respawn fix; some of the bosses' attacks are slowed down a bit.

8/27/2021 - Readjusted the respawn spot, as I forgot to readjust their variables.

I’ve been meaning to give my opinion on this game for a while:

I love the cartoony feel and animations.

The hit boxes on the players attacks are very wide so you don’t have to worry about your attacks missing and you can kill a lot of enemies at once.

Overall, without the bad I’m about to mention, it’s a very good, if basic (when it comes to fighting), beat ‘em up.

The special attacks are tied to health rather than than the super meter. You will literally never use special attacks ever because they do more damage to you than the enemies. If it was tied to the super meter it would both: give it a good limit as to not spam them, and make you decide between gaining a super or just using special attacks. With how it works currently you practically have your legs broken for trying to use the specials.

The grab mechanic kills the game. I know many beat ‘em ups use a ‘walk into enemy to grab’ mechanic, but due to this games large hit boxes you will always grab everything around you. You can never go anywhere or do anything because your character will be too busy grabbing a random enemy and stopping themselves dead in their tracks (this is one of the two excepts I was referring to with movement).

The knockback in this game is insane. I’ve been sent flying across multiple side scrolling sections because an enemy tapped my character once. Either the knockback shouldn’t send you as far as it does or enemies need to hit you with a harder hit than a love tap to be able to send your character flying. Combined with the grab mechanic it makes positioning your character nigh impossible.

Some animations are buggy, like stun. Sometimes the eyes don’t spin like they are supposed to (referring to the player characters) and, the characters, are completely static. In a preview video they were animated and since they are already very buggy I’m going to assume that’s a bug too.

Finally, a very minor issue, the stun mechanic in general is bewildering. I wouldn’t mention it if it applied only to the player, but this refers to enemies too. Sometimes I’ve tapped an enemy once and they are stunned, other times I’ve wailed on them for a minute straight and they don’t care. Same thing has happened to the player character (me) multiple times. It’s not a big problem at all, it’s just so strange when you notice it and I had to point it out.

Whew. Alrighty! Thanks for the feedback here! Time to write these down.

I hope I wasn’t too rude or aggressive with the post. Thanks for responding.

No worries! ^0^ This is what I need to help improve the game

Game feels okay to play, some tightening up can work. Some combos feel pretty stiff(Hina's normal) though. Jump is also a little weird, as the hit box seems to still exist on the ground, or some enemies have really weird hit boxes(The trenchcoat enemies with their slides feel like a 50/50 when jumping).

Also some of the items in the stage seem to either be pick up and throw or attack to destroy. There doesn't seem to be a visual difference and there's been more than a few times I've been swinging at something I should be grabbing. That or positioning is weird.

One other thing is that bosses seem to be either rather easy(Oni sisters, Train boss, ghost boss) or annoying(Train, Plane, and Lady Wolf to a degree). Plane espically as she eats more into your time than your HP with that gust attack.

Speaking of time, there's often a lot of time wasted waiting for enemies to get back on screen. I'm not sure how easy this would be but could you speed them up when off screen a little bit?

Sound/Music; This seemed okay to me. Nothing really wrong.

Graphics/appearance; I do like the look of the game, the old toony style is really good but some of the characters(Hina and Vivia mainly) have some weird looks while holding items, but that just seems to be due to the fact the 'hold item' animation is also 'hold enemy'. But that comes off just a little weird with something like a sword or bat.

I'll have to try it a few times more with the fixed score screen but I do like what I see.

Okay! Thank you so much for the feedback!

I got to stage 3 and the game just seems to end at the score screen after completing. Bug or intended?

EDIT: Okay I think I found the problem, though dunno if it's on MY end or not. Stage three seems to be the 'end state' of the demo and when it ends you're expected to put in a 3 letter name or so for high score. But controls just seem to die on me when trying to do so.

Whoops! Okay, I gotta fix that bug. Thanks for the find!

Very vibrant demo and each character has an array of personality and such vast move sets it feels worth while replaying the demo as each character. Also love the theme and boss fights, all around a promising title!

What's this made on?

Hi there! I just want to tell you that I really like your game. The characters are very pretty to me.

In the Stage where you drive the car, if you move the character to the bottom of the screen, you can complete the level with very little damage, even if you don't jump to avoid the barrels.

When you have a thrown object in theory you should not be able to grab an opponent. It's a bit of a hassle to carry an item and drop it when grabbing an enemy.

There are low fps with more than 4 enemies on the screen.

The control buttons do not work when you are waiting on the help screen when starting the game, you must press the attack key from the keyboard.

I'm telling you all this because I've had a great time playing.

I hope you can get more levels or some alternative costumes for the characters.

thanks for the game.

Noted and thanks for the feedback! (hm I find it weird that the FPS drops like that; mine works fine) 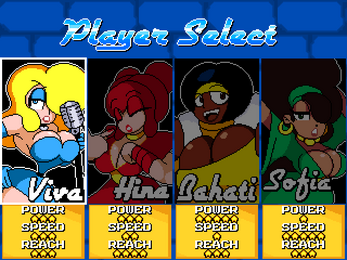 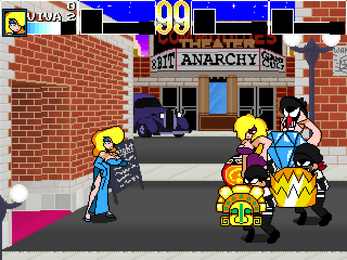 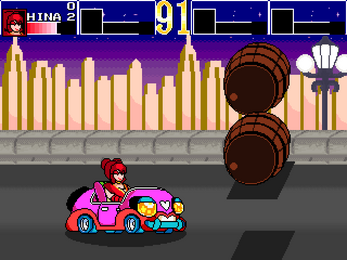 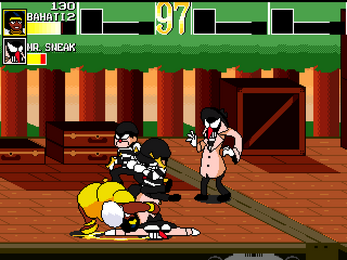 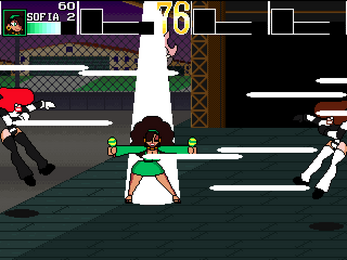 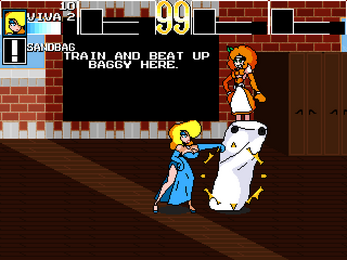 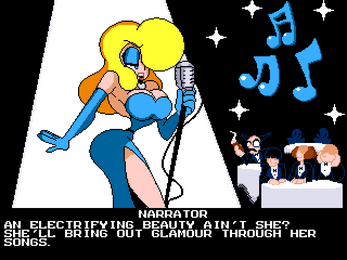